As the undisputed “Crown of the Continent,” Glacier National Park is grand, with its expansive views, mammoth glaciers, towering Continental Divide, historic lodges, hulking grizzlies, and, of course, big sky. But it’s the little things that make the park and its surrounding areas memorable on a personal level: white-spotted fawns prancing behind their wary mothers, overgrown two-tracks leading to lush hillsides and hidden creeks, dinners with friends at our beloved Northern Lights Saloon, and, of course, for Chris, the cutthroat trout that hang out around these parts.

At this time of year, when you can hear the grasshoppers go click, click, click, it’s time to start fly-fishing in earnest, Chris says. The water is low, the fish are jumping, and you can find Chris standing calf-deep in a stream, happily tying a hopper to his line. This is usually a good time for me to search for the tiny treasures I love most out here: wildflowers. Although we enjoy fishing and hiking together, sometimes we like some one-on-one time with nature (bear spray securely attached to our belts). So, often times when Chris is busy reeling ’em in, I poke around on nearby trails, camera phone in hand, anxious to see what I can catch too.

When I first started collecting mug shots of flowers so that I could identify them later using a guidebook, I had no idea how difficult some species would be to pin down, nor did I expect the amazing stories, funny names (butter-and-eggs?), or homeopathic uses behind many of them. Here are just a few of the many, many gems we’ve found while traipsing around this vast, rugged terrain that is home to such delicate creatures.

(Note: I used Wildflowers of Glacier National Park and Surrounding Areas, by Shannon Fitzpatrick Kimball and Peter Lesica, to identify most of the flowers listed below. If I’ve misidentified something, or you can identify those plants that I could not, please leave a comment. Thanks!) 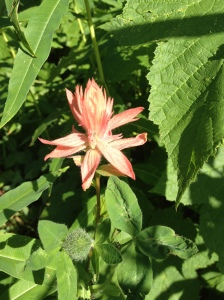 One of my favorites, the paintbrush is orangey-peach, red, or even magenta, according to specific species, which appear at different elevations.

Long-lived and resistant to fire, beargrass was once used by Native Americans to make baskets and hats. The flowers are a favorite of elk and bighorn sheep.

First reported in North America in 1934 (although it was first described in Europe in 1597) and named birdsfoot for its petal formation, this plant is considered a valuable forage crop—though I’m not sure what it’s doing around here.

This cheerfully named weed was introduced from Europe and, along with weed invasion in general, is considered the most visible sign left by early settlers of Glacier National Park.

To Chris this is ragweed; but I’m pretty sure it’s not. Anyone know for sure?

An early colonizer of freshly burned areas, where it thrives (hence the name), this plant is ubiquitous on the trails we’ve frequented. Herbalists use the leaves in tea to relieve digestive problems and as a wash to heal skin irritations.

Native Americans used the leaves of this Tinkerbell-like flower to treat coughs and tuberculosis.

These flowers do not exactly match the color patterns of Indian blanket in the guide-book photos I’ve seen; however, no other species seems to come any closer in resemblance. Can someone positively identify this colorful flower from my unfocused photo?

Native Americans and early settlers used the bulb of this plant for food, which is considered nutritious and has a sweet, potato-like taste.

Thanks to a reader (BGJ), I’ve been able to properly identify this plant as the common mullein (referred to as “cowboy toilet paper” in the western United States), and not the monument plant, which it favors. Each flower blooms for only a day, and the seeds of this scrappy plant can regerminate for up to 100 years. Common mullein is used to treat against pulmonary diseases (especially cough), hemorrhoids, ear aches, frostbite, and more. 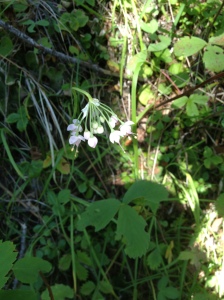 When this plant fruits, the nodding stem becomes erect, which helps the plant distribute its seeds. Native Americans dried the bulbs to eat during the winter. They are quite pungent when eaten raw but mellow into sweetness with cooking.

Sometimes known as barberry, this plant was used extensively by Native Americans for medicinal and ceremonial purposes. The Blackfeet tribe used the bark and roots to treat kidney and stomach ailments, and as an antiseptic to relieve itching. Modern-day herbalists use it as a stimulant, a mild laxative, and a remedy for anemia and general malnutrition. The berries of the plant (not shown here) are made into jams, jellies, and wines. 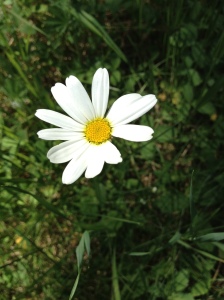 Meadows in and around Glacier National Park are in danger of being overrun by this “weed,” and it is therefore monitored by park staff. Outside the park, it is harvested for use in gourmet salads, and herbalists make tea from its leaves, using it  as a diuretic and an astringent, and to stop or prevent excessive bleeding. 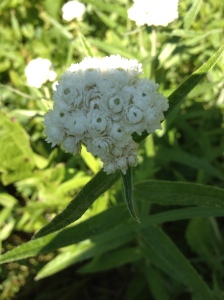 This flower maintains its pearly appearance well into the fall, making it a favorite in local flower arrangements. Herbalists use it to lower fevers, loosen chest congestion, and promote sedation. Native Americans used it to treat tuberculosis, headaches, asthma, and skin abrasions; they also smoked the leaves as a tobacco substitute. 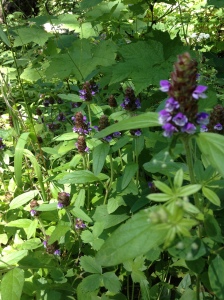 Also known as heal-all, this plant has been used to alleviate a number of conditions, including nausea, diarrhea, fever, and sore throats. Applied topically, it also speeds the healing of bruises, rashes, and skin ulcers.

Herbalists use this purple-hued plant as an astringent and to treat diarrhea, gastritis, gout, and bladder pains. The Blackfeet tribe used its powdered roots to stop external bleeding; they also made a tea with its leaves to alleviate cold symptoms. 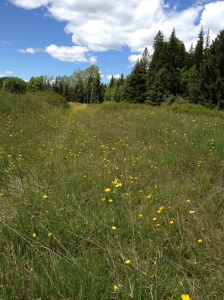 This subspecies of the little buttercup (Ranunculus uncinatus) begins to fill our meadow in June. Although we’re very fond of this cheerful harbinger of summer, the park considers it an invasive weedy species, recently introduced to the Polebridge area and now showing up inside the park. (We had nothing to do with it.) 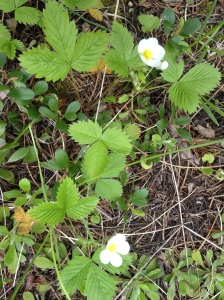 An important food source for birds and small mammals, the berries of this plant were also eaten by Native Americans, who used the roots to treat digestive ailments. I like to gather a few on hikes. Those tiny berries pack a powerful punch. 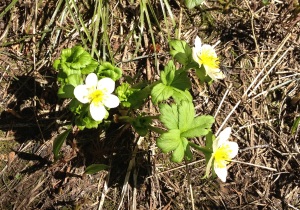 This strawberry grows in similar habitats to that of the wild strawberry, and it looks quite similar too. I had a heck of a time identifying it without its berries, so I’m including it just because of all the time I spent researching it! 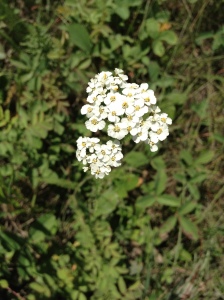 A ubiquitous plant of Glacier National Park, yarrow has adapted to many ecological niches. Its medicinal value has been recognized for centuries. Tea made from its foliage has been used to treat colds, fevers, and diarrhea; compresses made with its leaves have been used to relieve earaches, burns, and insect bites.