A Note from Chris: Fly fishing for trout: for me it’s not about catching a lot of, or big, fish. It’s about so much more. Standing hip deep in gin-clear water produced from glacial melt high in the Rockies, surrounded by unspoiled wilderness, absolute solitude (with the exception of the bald eagle skimming the water or the bull elk drinking at the bank) … that’s what it’s all about. It’s here that I feel closer to God, more connected to the universe, more at peace with myself, than anywhere else.

Wildflowers are to Monica what trout are to me. Both are beautiful, awesome, and often subtle. But everyone, I believe, has a place or thing that is uniquely special to them that makes their soul feel at home. Mine is the river. Specifically, the North Fork of the Flathead River and its tributaries.  Why is it so magical?  I haven’t been able to answer that question. I do know, however, that I have been blessed to have been able to fish in some amazing places like Chilean Patagonia, southern Montana, Idaho, Alaska, New England, Norway, Michigan’s Upper Peninsula, and Scotland. Yet, the North Fork, unlike anywhere else on the globe, draws me like a super magnet to a ’57 Chevy. 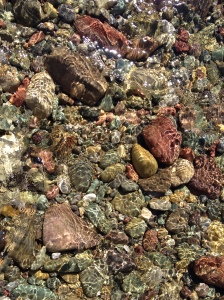 Here on the river stress melts away as I witness miracle after miracle.  Take, for instance, river rocks. In late summer the stream banks are covered with dusty, colorless, dry rocks. But when the sister rocks are seen on the riverbed, under the crystal-clear water, an amazing transformation takes place. The most spectacular colors explode, adding to the symphony of senses produced by the sound of water rushing over boulders, and aspen leaves quaking in the breeze.  The river bottom is alive with vivid reds, and greens, and yellows, and every shade of gray and black (who’d have thought grays and blacks could be so beautiful?).  They shimmer like precious gems.  They are, I suppose, precious gems … teeming with insect life, ready to hatch and become life-sustaining food for trout, allowing me to use a fake bug to trick the wily fish. 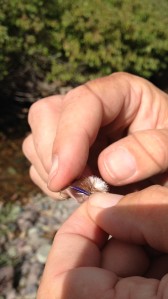 I know I said it wasn’t about catching fish, but it is, after all, the excuse to get out here, and they are a part of the whole experience. The North Fork drainage is teeming with native Westslope cutthroat trout. They are healthy and thriving, one of the last places on the planet that can claim this. It’s hard to describe the thrill of seeing one of these gorgeous creatures swaying in the channel, eyeing my caddis fly, and then “BAM, SPLASH” … the attack! They hit the bug on the surface with vengeance. Sometimes they propel completely out of the water in their quest for a meal. And then my adrenaline kicks in. I wait a second, then give a slight but firm tug on the line. Is he hooked? Sometimes yes, but often no.

When fate is smiling on a fisherman, the hook sets firmly and the epic struggle between man and beast ensues. It’s my practice to bring him in quickly, reducing his stress. If all goes well (and there are about 350 things that can go wrong), I soon have a spectacular trout in hand. The colors are hard to describe or capture on film; silvers, and browns, and reds, with a bright orange swatch on the jaw.  I’ve tried to take pictures, but holding a slippery fish in one hand and digging a camera out of my waders with the other, yet being mindful to quickly release the tired fish, all while standing in fast-moving water, is a challenge worthy of YouTube (just before press time, Monica took the great fish pics seen here … it’s a two-person job). So, I savor the moment and then quickly release him to retreat safely to his natural habitat. To me, its absolute beauty is perfection in nature.

We also have the feeder streams born high in the mountains. These tiny creeks (or “cricks” to many) have a different allure than the main river. Winding slowly at times, then rushing over logs felled in a long-ago storm, then cascading over granite boulders, they often don’t show up on maps.  Sometimes they aren’t even named. But, almost always, getting to them is an adventure in itself.  The “big road” is wide and two-laned, albeit gravel; yet it seems like a highway compared to the two-tracks leading to these little known creeks. The roads are narrow, rock strewn, and accentuated with Monica’s wildflowers overgrowing the pathway.

Accompanied by Isabella, my one-weight delicate rod built for these tiny waterways, I search for smaller cutts. Don’t let their size fool you, though. They are fighters and attack with the same gusto as their downstream brethren. The glorious colors and patterns of these small brook salmonoids surpass even those of the river fish. 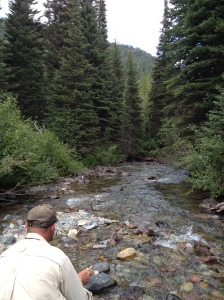 It seems amazing to me that trout can thrive in this setting. Winter brings brutal weather that blankets these little creeks to the point that one can barely tell a stream exists. Somewhere, I assume, a beaver dam has created a deep pool for the fish to hibernate.  Then with the spring thaw they return to life, and the cycle starts over again, allowing obsessed fools like me to intrude on their magical world. For me, that’s what fly fishing for trout is all about.

3 thoughts on “All the Pretty Gills”